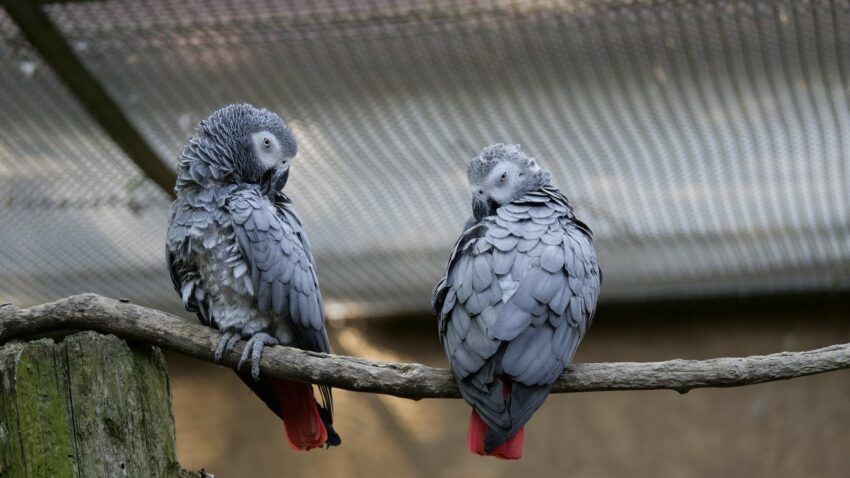 Want to know more about one of the most talented and intelligent creatures in the animal kingdom? Here is some basic information about the African grey parrot.

What Is An African Grey Parrot?

African grey refers to two kinds of medium-sized grey parrots with red tails that are native to Central and West Africa. They are the Congo African grey (CAG) and the Timneh African grey (TAG).

For those who care about such things, the scientific name of the Congo African grey is Psittacus erithacus, and for the Timneh it is Psittacus timneh.

African grey parrots have the ability to mimic human speech. They are highly intelligent, and are prized companion pets.

What Is The Difference Between The Congo And Timneh?

There are several differences.. To begin with, the Congo is a little longer and larger than the Timneh.

For me, the easiest way to tell that a parrot is a Congo African grey is by the coloring of its beak. That’s because it is black, whereas the Timneh has a lighter, horn-colored patch on its upper beak.

The feathers of the Timneh are dark, almost charcoal grey, compared to the lighter grey of the Congo.

The Timneh’s tail feathers are maroon-colored. The Congo’s tail is bright red.

The African grey is famous for its outstanding ability to reproduce sounds that it picks up from its environment.

More impressive is its ability to mimic human speech. The Congo grey speaks in the voice of the human that it is copying. However, the Timneh speaks in its own voice.

African greys are even capable of singing.

There are numerous examples on television, online media, and elsewhere, of African greys demonstrating vocabularies of several hundred words, and the ability to replicate almost any sound.

About The African Grey Parrot’s Habitat

The African grey is native to equatorial Africa. The Congo grey lives in large areas of central Africa ranging from the west coast and reaching countries like Uganda and Kenya in the east.

The Timneh occupies a much smaller area, ranging from Guinea-Bissau and reaching as far as the Ivory Coast in the south.

There is almost no overlap between the habitats of the two species.

The lifespan of the African grey parrot in captivity is in the range of 40 to 60 years. Some sources even suggest that a life expectancy of 80 years is possible.

In the wild, the life expectancy of the bird is dramatically lower at around 23 years.

What Do African Grey Parrots Eat?

The African grey’s natural diet consists mostly of fruits, nuts and seeds. It will also eat certain flowers, the bark of trees, snails and insects. It has a preference for the fruit of the oil palm.

In captivity, it can feed on most raw fruit and vegetables found in the average household. It can also eat pellets, various seeds, nuts and some human foods.

Elsewhere on this website you can find our comprehensive list of safe foods for parrots, complete with nutritional information for most foods.

Certain human foods, like avocado, are toxic to parrots.

African grey parrots are sexually dimorphic. This means that there are differences in the outer appearance of males and females.

The differences between genders are very subtle. Therefore, it is difficult to identify a bird’s gender unless you compare the male and female directly to each other.

You can’t use this method to establish the sex of young birds. That is because physical variations between genders only appear from the age of about 18 months.

Reliable ways to determine the gender of captive birds are through surgical examination, or by DNA testing.

In the wild, African greys nest in tree cavities. Usually, only one pair occupies a single tree. They frequently take over holes abandoned by other birds such as woodpeckers.

The hen lays between 3 to 5 eggs. She is fed by the male while she incubates the eggs, and both parents feed and care for the chicks after they hatch.

Conservation Of The African Grey Parrot

Although greys have a few natural enemies, humans pose the greatest threat to them. Deforestation, and the trapping of birds for the international pet trade has caused their numbers to decline sharply.

Estimates of population sizes in the wild vary widely. These range from several hundred thousand birds to more than 10 million. However, there is no doubt that their numbers are shrinking.

It is estimated that in Ghana, the population of African grey parrots has been decimated by as much as 99%.

The International Union for the Conservation of Nature (IUCN) has classified the African grey parrot as ‘endangered’ (EN). This ia a negative change from the previous ‘vulnerable’ (VU) classification. This means that there is a very high risk of extinction in the wild.

This ban does not affect the commercial trade of captive-bred grey parrots.

For a long time, many who have owned, or have observed African greys over time, have believed that they possess high levels of natural intelligence.

It was not until Dr. Irene Pepperberg shared the results of her research with an African grey parrot called Alex, that scientific evidence emerged to support such beliefs.

Dr Pepperberg showed that Alex was able to understand simple verbal instructions. He could also correctly identify characteristics of various objects according to their number, color, shape, size and material composition.

Alex died unexpectedly in 2007, but Pepperberg has managed to replicate her results with several other African greys. since then.

African grey parrots have the cognitive and reasoning abilities of a 3 year old human child.

No article about the African grey parrot would be complete without mentioning grey parrots that have achieved fame by showcasing their intelligence and talents.

Einstein is probably the best-known parrot mimic. She achieved fame after appearing on TED in 2006. She was trained by her keepers at Knoxville Zoo in Tennessee, and had a repertoire of around 200 words and sounds.

Prudle won the title of ‘Best Talking Parrot-Like Bird’ at the National Cage and Aviary Bird Show in London for 12 years in a row, between 1965 and 1976. She had a vocabulary of around 800 words. She retired undefeated.

Based on these achievements, Prudle is recognized by the Guinness Book of Records as ‘Best Talking Bird’.

Alex became the subject of Dr. Irene Pepperberg’s ground-breaking research into animal cognition and became famous after Dr. Pepperberg wrote about and demonstrated her findings.

N’kisi has an impressive vocabulary of over 900 words. He was supposedly able to recognize Jane Goodall, the celebrated chimpanzee researcher, after only having seen her in a photograph. Upon their first meeting he asked her “Got a chimp?”

N’kisi is also claimed to have telepathic abilities.

To test this, a study was devised wherein he and his owner, Aimee Morgana, were placed in separate rooms and recorded using synchronized video cameras. Aimee was shown several photographs which she studied for 2 minutes at a time.

In the other room, N’kisi’s utterings were recorded and analysed for keywords relating to the pictures shown to Aimee.

In this study, N’kisi’s score was almost twice what would normally be attributed to chance. However, the scientific community has treated this study with skepticism.

About The African Grey Parrot As A Pet – A Demanding Commitment

African grey parrots are intelligent, playful and social animals. As a result, they demand frequent and stimulating interaction with their owners. Without it, they can become bored and depressed. This can lead to the development of destructive and aggressive behaviors.

To stay healthy, they require clean living areas and space that allows them to be physically active. They also need a diet that is varied and nutritious. That means that they need to feed on fruit and vegetables daily, in addition to seeds.

Caring for an African grey requires a lot of time of its owner, and a constant awareness of the bird’s needs.

Owing to its long life expectancy and its tendency to bond with a single person, caring for an African grey parrot must be a long-term commitment.

Want To Know More About The African Grey Parrot?

Please feel free to explore this website. Whether you are a prospective African grey owner or you already own a grey you are very likely to find what you are looking for here.

We are continuously adding new articles, guides and information about African grey parrots. If you don’t find what you are looking for right away, come back regularly.

Alternatively, leave a comment to let us know how we can help. We’ll do our best to accommodate you.

Next > What To Feed An African Grey Parrot

36 thoughts on “About the African Grey Parrot – Some Basic Facts”